Denim's dam, Flamed Acclaim, was one of the last living own daughters of Dash For Cash when Denim was born. She's produced multiple 1D barrel horses. Dash For Cash had a speed index of 114 winning $507,689. He sired progeny with earnings of over $39.9M on the track alone. He was sired by Rocket Wrangler, who had a speed index of 97 winning $252,167. His dam, Find A Buyer, won $3,134 on the track. She was the dam of race ROM, stakes winners, and track record holders. She was inducted into the AQHA Hall of Fame. Flamed Acclaim's dam, Timedancer, was a daughter of Timeto Thinkrich, who had a speed index of 99 winning $612,859 on the track. Her dam, Trippy Dip, won $78,169.

​In training with Lisa Warfield in Helena, MT. 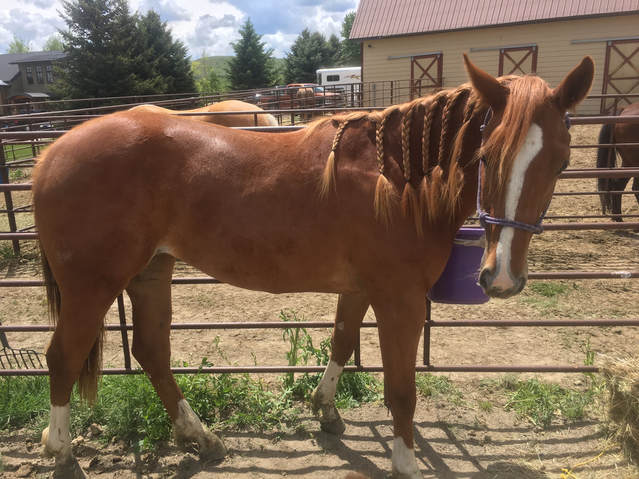 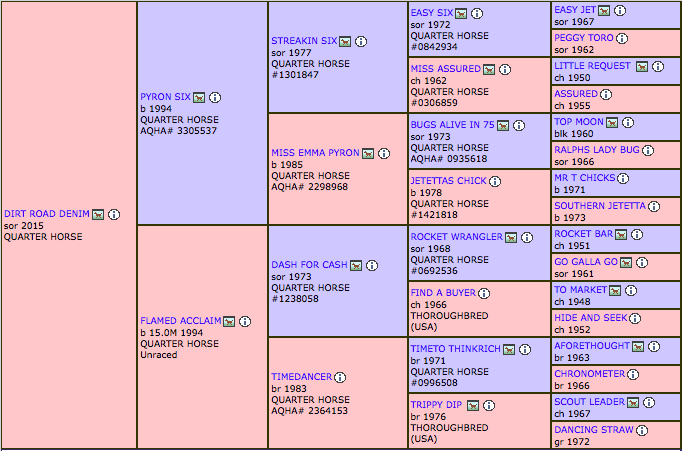 SHAW ME YOUR TALENT

Shaw is a cute brown filly. She has a great personality, and is scary fast. She'll be a lot of fun to start under saddle! Her dam was a 1D/2D barrel horse, 21-second pole horse, and NHSRA qualifier in goat tying. 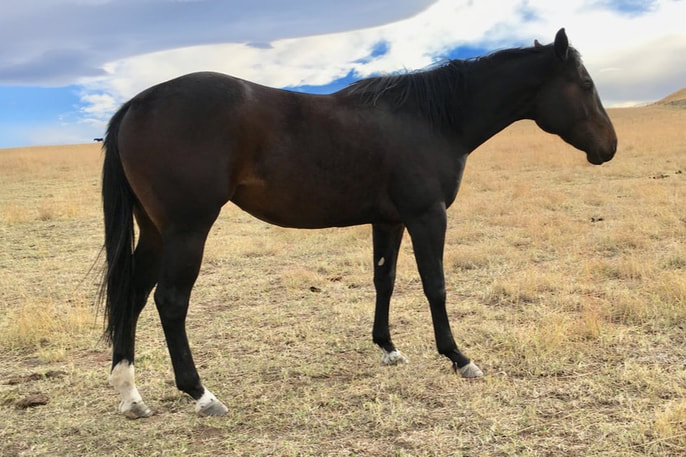 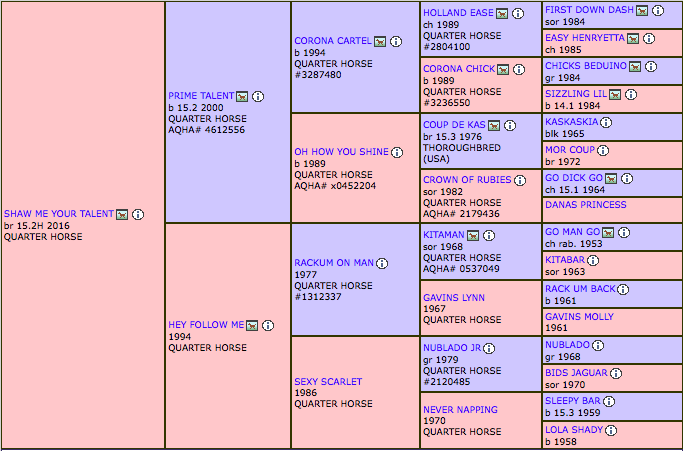 Jailbird is a very nice 4-year-old up and comer here at Heart C Barrel Horses. This gelding is built and bred to run! I bought this horse because his build reminded me of my talented barrel horse, Fighter.

In training with Lisa Warfield in Helena, MT. He is high loping the pattern and will be ready for futurities in November! 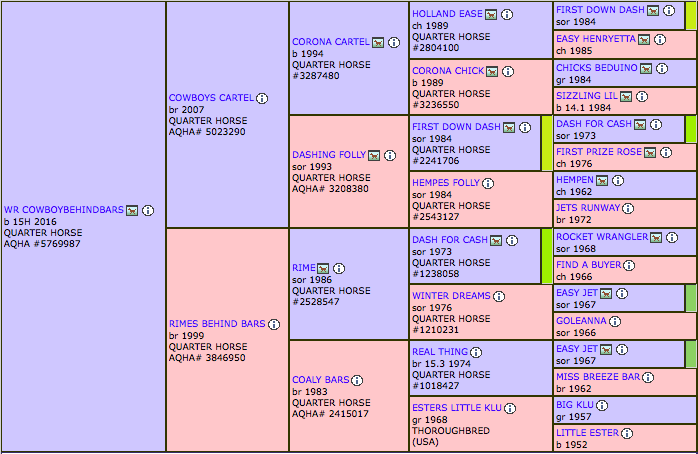 Hottie is a home raised "hottie" for sure! He's big and beautiful! He's been the biggest of my colts, starting as a newborn and just gets bigger. We are excited to get Hottie started!

Hottie is sired by Ima Firefighter aka "Backdraft", who is a 1D money-winner and Mid-States Rodeo Finals qualifier, as well as a finished heading and heeling horse. He has proven to be a 1D and rodeo producer. His sire, Fire Water Flit, is an Equi-Stat all-time top 10 leading barrel racing sire of earners of over $2.4M. His sire, Flit Bar, and dam, Slash J Harletta, are both proven producers of champion barrel and rope horses. Slash J Harletta was an NFR qualifier and produced 3 NFR qualifiers. Ima Firefighter's dam, Ima Copper Bugs Too, won over $100K in her barrel racing career, holding arena records in the U.S. and Canada, as well as competing in 3 Canadian Finals Rodeos. She is sired by Copper Bugs, who had a speed index of 109 and won over $204K, including winning 3rd in the All-American Futurity, winning his trial. Her dam, Jetlarks Jackie, had a speed index of 91 winning over $1,000. Copper Bugs was sired by Bugs Alive In 75, who had a speed index of 94 and winning over $255K. He sired 53 stakes winners, 24 stakes placers, 249 ROM earners, 31 Superior race awards and 14 regional champions. 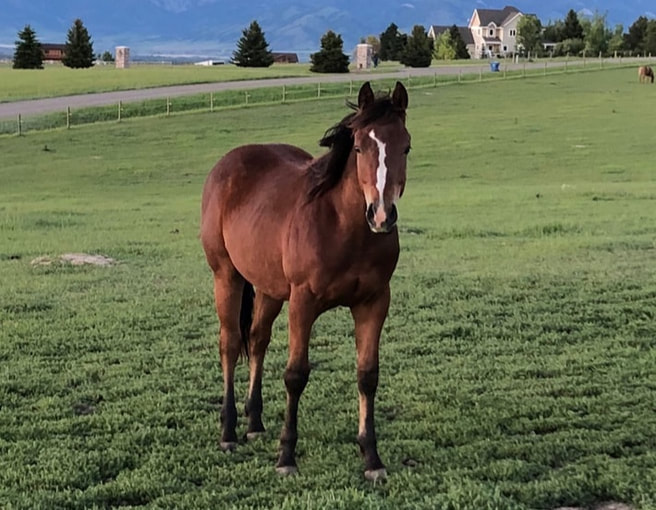 Lena is sired by the immortal The Goodbye Lane out of a Tuff Lena mare.

​Lena's dam, Tuffs Lizzy Beth, was sired by Tuff Lena, who has sired NCHA earners and barrel racing money earners. Tuff Lena's NCHA earnings are $9,693 with progeny earnings of over $228K. Tuff Lena was sired by Doc Olena, who was a 1971 NCHA futurity champion and has LTE of $21,991. He sired Smart Little Lena, who had lifetime earnings of over $577K and sired progeny earnings of over $4.2 million. Doc Olena was also inducted into the AQHA Hall of Fame. Tuff Lena's dam, Misty Pop, had NCHA LTE of $3,622. Misty Pop was sired by Pop Up, who had a speed index of 75 and sired ROM earning offspring. Tuff Lizzy Beth's dam, Chrome Little Pearl, was sired by Chrome Quixote by Doc Quixote. Doc Quixote had NCHA LTE of $3,728. He was the 1973 NCHA Cutting Futurity Non-Pro Champion and was inducted into the NCHA Hall of Fame. He sired progeny with earnings of over $1 million. Chrome Little Pearl's dam, Joepico Jay, was sired by Rey Jay. Rey Jay had NCHA LTE of $20,597. He earned his superior in cutting and was an AQHA Champion. Joepico Jay's dam, Tamu Joepico, was a granddaughter of foundation sire, King. 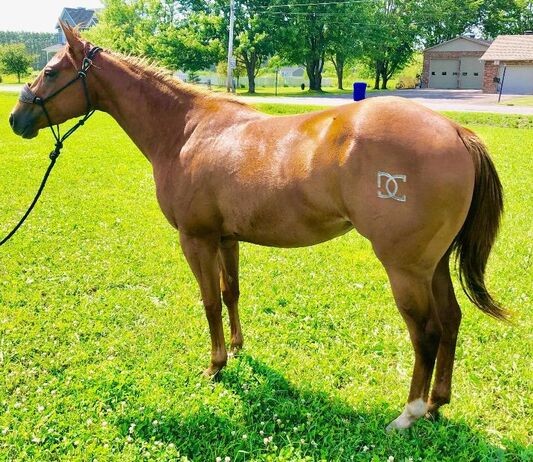 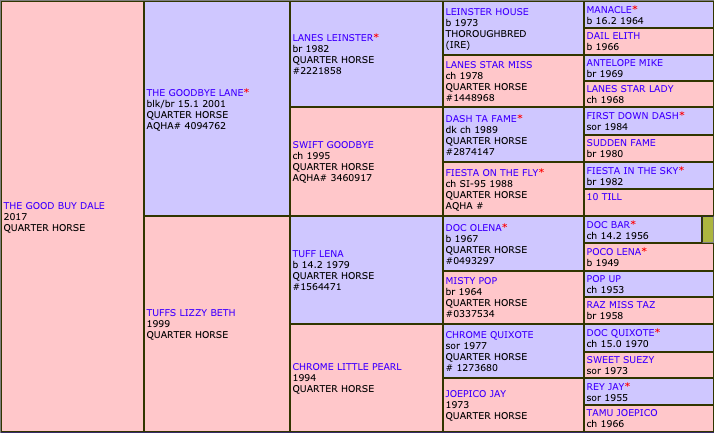